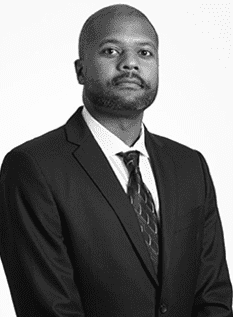 Recognized as a “Missouri & Kansas Super Lawyer,” Dione C. Greene is a trial lawyer that has helped many clients solve their legal problems. Having defended some of the nation’s largest corporations for over a decade, he decided to start DCG Law Firm in 2019. Within the first 4 months, he secured a judgement of over 1 million on behalf of a client with a disability terminated by one of the nation’s largest corporations. He has also helped businesses recover hundreds of thousands of dollars.

For over a decade, Dione successfully advocated for some of the largest corporations and schools in the world. Handling high profile national lawsuits, he became a partner at Armstrong Teasdale, one of the most prestigious law firms in the Midwest. But he now advocates for individuals, victims of unfair practices, students, and small and mid-size businesses.

Prior to becoming a trial lawyer, Dione clerked for the Honorable Duane Benton at the Eighth Circuit Court of Appeals.

Working with plaintiffs, Dione advocates on behalf of clients wronged in their employment and civil rights. Discrimination, harassment, retaliation, bullying, assault and battery. He is very familiar with the internal workings of America’s largest corporations and school districts. He has recovered hundreds of thousands of dollars on behalf of clients and secured a jury verdict of over 1 million within the first 4 months of starting DCG Law Firm.

Dione represents small and mid-size businesses in breach of contract cases, trademark, franchise, and business litigation. He has recovered hundreds of thousands of dollars on behalf of clients. He has also handled trademark infringement and business franchise matters.

Within four months of starting DCG Law Firm, secured a jury verdict of over 1 million on behalf of plaintiff involving claims of disability discrimination and hostile work environment.

Won appeal in United States Court of Appeals for the 8th Circuit in case involving 7-year-old handcuffed by police officer.

Obtained summary judgment for a Fortune 100 company before the U.S. District Court for the District of Kansas in a case where the plaintiff alleged illegal discrimination.

Successfully argued and won an appeal for a government agency, wherein the plaintiff alleged she was terminated due to age and in retaliation for complaining about unlawful activity.

Obtained summary judgment in favor of a Fortune 500 company in the U.S. District Court for the District of Kansas, wherein the plaintiff alleged age, disability, and race discrimination.

Persuaded the U.S. Department of Labor to drop an expansive investigation and class action lawsuit against a Fortune 500 company alleged to have systemically violated its employees’ FMLA rights.

Won a jury trial in which the plaintiff alleged age discrimination and retaliation against a Fortune 500 company in the U.S. District Court for the District of Kansas.

Obtained a favorable jury verdict for a municipality sued for retaliation.

Submitted a winning appellate brief, in which the Court of Appeals for the 10th Circuit affirmed a summary judgment victory.

Obtained summary judgment in favor of a Fortune 500 company named as a defendant in a discrimination and harassment case filed in the U.S. District Court for the District of Kansas.

Convinced the Wage and Hour Division of the U.S. Department of Labor that a retaliation complaint filed against a Fortune 500 client had no merit. The complaint was brought by a former employee who alleged she was terminated for taking FMLA leave.

Convinced a plaintiff to drop a sex discrimination suit against a small staffing firm, thus saving the client thousands of dollars.

Convinced a Missouri jury to return a defense verdict for a school system in a challenging age discrimination and retaliation case brought by a 20-year veteran teacher.

Co-Author, “Are You Properly Classifying Exempt Employees Under the FLSA,” Missouri Employment Law Letter (May 2014)

Speaker, Employment & Labor Law Seminar, “The ADA in a Post-Amendment World: The Legal Landscape Shifts in Favor of Employees” (February 2012)

Speaker, “Avoiding Harassment and Discrimination in the Workplace” (April 2011)

If you have any legal problem in your life ... We are available